The story of women's struggle foe equality belongs to no single feminist nor to any one organisation but to the collective efforts of all who care about human rights.

There has been so much written on the subject of sexism, misogyny and feminism of late. Three cheers to all those who have written so eloquently on the subject lately without turning it into a competition.

It concerns me however that in a lot of the comments on blogs, newspaper items, tweets and discussions, a number of women start their comment with 'I'm not a feminist, but…' or 'I'm not an avid feminist, but…' while agreeing with the writer or commentator about the deplorable state of affairs for women.

I became a feminist (or at least with the benefit of hindsight, became a feminist) at the age of eight, when I was expelled from Brownies for refusing to earn my badges for sewing, craft, and various other 'feminine' pursuits. Actually the truth is it was probably writing 'Brown Owl is a bum' in chalk on the footpath Brown Owl walked on her way home, after getting into trouble for that attitude that got me expelled but I took a stand. You see the Brownie hut was next door to the Scout Den and they got to build fires and canoes. I didn't understand why I couldn't do that. I can still build the BEST fire but don't ask me to sew on a button.

From a young age I was aware of discrimination — at high school being made to do Mothercare lessons which again I eventually refused to do. I went to university and studied law. In one of my first lectures the male lecturer told us how much a degree would be worth over the course of our careers, but added it wasn't as important for the female students because we could always just marry a lawyer. My complaint to the Dean went nowhere.

The thing is this — no woman should be embarrassed about being a feminist, or worry about being labeled a feminist. Being a feminist is terrific, and is not an exclusive club — all the members of that club are frankly marvellous. So here is my take on it:

EVERY woman who believes that equal work deserves equal pay is a feminist.

EVERY woman who believes workplaces should not be places of fear just because of your gender is a feminist.

EVERY woman who believes promotion should be on merit and nothing else is a feminist.

EVERY woman who believes that girls in Afghanistan and Pakistan deserve the right to go to school without fear of being shot at is a feminist.

EVERY woman who believes that women have the right to choose whether or not to have a baby is a feminist.

EVERY woman who believes no one should suffer through a violent relationship out of fear and want to help that woman is a feminist.

EVERY woman who believes she has the right to walk home after a night out without having to fear sexual assault is a feminist.

AND – EVERY man who believes these things is a feminist too.

You don't need to be feisty about it, grow armpit hair, hold placards or write articles. But you can if you want to.  You can call it as you see it without the need to apologise for your views. You can do it quietly or loudly. You just need to do it, and be proud of it.

There are lots of disagreements amongst feminists about what it takes to be one and they are always interesting discussions. These are just my simple rules. I think we're all feminists and I'm proud to be one.

Thanks to Destroy The Joint for publishing this cartoon in 2013. 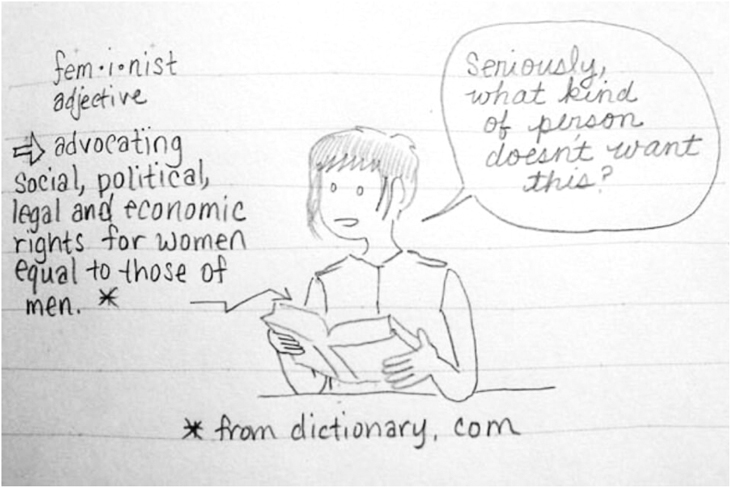